Dents can be categorized into 4 types:

Shallow dents can be pulled out using body shop suction cups (see supplier section for tools). Large dents, creases & scraps usually require skin panel or segment replacement. Airstream dealers actually replace skins all the time. If you have sheetmetal experience, you can remove and fabricate new flat panels or the earlier 13 segment crown panels with their simple curves, reinstalling with Olympic rivets. The formed compound segments found on the 7 segment and later crowns are out of the skill of most people.

Some large dents that are too small for a suction cup, or won’t pop out because the metal has been stretched by the dent, can be pushed out and formed from the inside using simple body spoons. This requires opening or removing the inside skins, but once again is rather common. The inside skins are resecured using standard aluminum pop-rivets.

Small dents, especially hail dents, are considered beauty marks, and are usually overlooked in a restored trailer. It has been rumored that dry-ice can remove them, but I’ve disproved it (see later section below)

If you have a puncture or large dent below the window line, the best and smartest repair I’ve seen is to cut out the damage with a square opening, and line the hole with the same material as other access and service panels doors on the trailer. Fabricate a plug door using the same methods as the other doors, install a locking latch, and voila! No one will ever know. It has fooled me a couple of times, only becoming apparent when the owner opened the door, exposing the insulation between the skins. I even saw a curved door up on the from curved panel. Looked just like a service door. 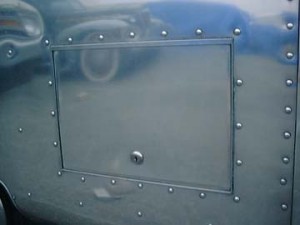 One method that always circulates is using dry ice to contract the displaced aluminum (dent) causing it to pop back into place. Having a few hail dents on the Caravel, I bought 5# of dry ice from the local dairy and set to work. I tried every process I could think of, cooling the dent itself, the area around the dent, trying it with hot skin, and cool skin, long soak, etc. The dents were never affected. A body shop guy I talked to says that it will work on steel panels but not aluminum. Even the body shops have stopped this method with the use of electromagnets and vacuum (paintless dent removal). The vacuum is an idea that still may be worth a try. 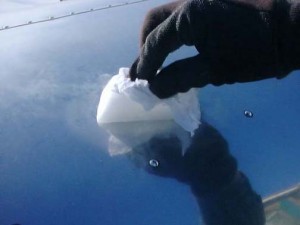 Fluxtronic has introduced a hail dent removal tool called the PFR3, and will sell it direct, or can pull dents as a service. They currently travel the US pulling dents, going to exhibits and doing demonstrations.

The PF3 EDR is priced for airlines, aircraft repair stations and possibly larger Airstream dealers, as it costs over $200,000!

Here is a before and after shot of a large dent that afflicts many older trailers. Paul Farley, the restorer of this beautiful 1948 Wee-Wind, removed the dent you see with auto body suction cups, and being the perfectionist he is, opened the inside skin and smoothed out the area to a blemish free surface. On such a repair, if the dent wants to pop back in, formed Styrofoam blocking between the skins will hold the outside skin in place.