The World Traveler was made in 1958 and 1959, and was introduced as part of the “International Fleet”, and is recognizable from the outside by being the only 22 footer with tandem axles. Designed for overseas Caravans, only 4 were made in 1958.

Evidently there was also one(?) California version made, as witnessed by s/n 8435. The guess is that a customer on the west coast really wanted that layout and features, and rather than mfg it in Ohio and ship it (big deal in those days), that the California factory built one to Ohio specs and used a Ohio WT model plate. 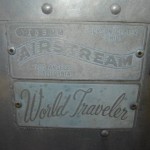 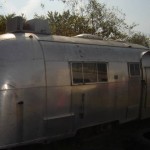